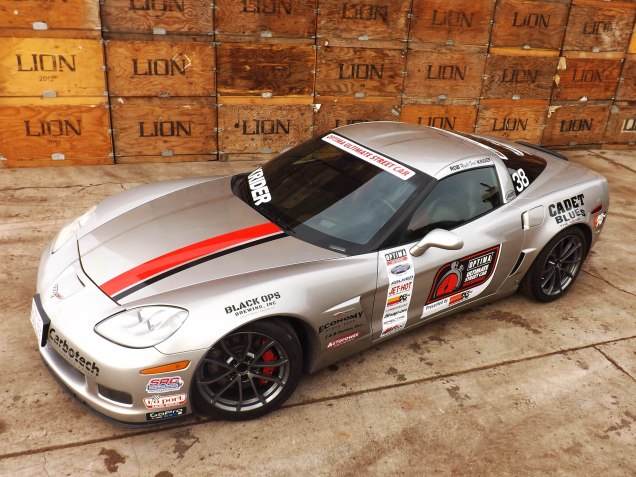 A monster to drive and the fastest thing in the team’s fleet. This car won just about everything it entered. The car was so epic, it has its own website: www.Z06Life.com. Here you can see the car in its Optima Ultimate Street Car Invitational (OUSCI) livery. 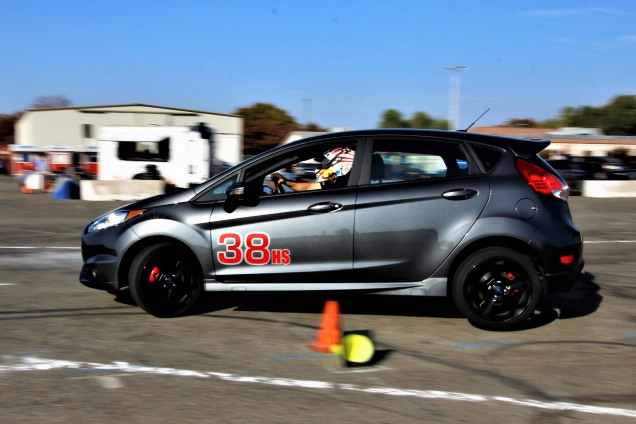 A project car for FordMuscle.com which was also a commuter car for Rob Krider, the Ford Fiesta ST became a toy for autocross events in the SCCA H Street class winning an undefeated season in 2020 and then winning the Economy Class at the 2021 One Lap of America event.

After having to drive the “B” car for years, the team finally built a proper Honda Challenge car for Keith Kramer (The “C” Car) and he has been winning races in it ever since.

The first workhorse for Double Nickel Nine Motorsports. The car was incredibly balanced.

Purchased for $800, ran in the 24 Hours of LeMons and then modified to compete in the 25 Hours of Thunderhill where it took home a podium finish, this little Nissan did huge things for the team. Here is it shown winning a three hour enduro at Sonoma Raceway.

Sam “Terp” Galindo joined DNN Motorsports in 2020 and is completing his rookie season in SCCA autocross, gunning for Rookie of the Year honors.

This daily driver gets Addy Krider to school and cheer practice everyday. It was “borrowed” by her dad and run in the 2016 opener of the Optima Search for the Ultimate Street Car.

This “B Car” for “Back Up Car” has been hit more times than our destruction derby ride. Built as a parts car for the Honda Challenge series, this car has seen more time on the track, and shamefully off the track, than the “Hero” car a couple of seasons.

This car just keeps getting faster and faster as it is modified and adjusted. Here you can see it flying up the mountain during the Hooopa Hillclimb. 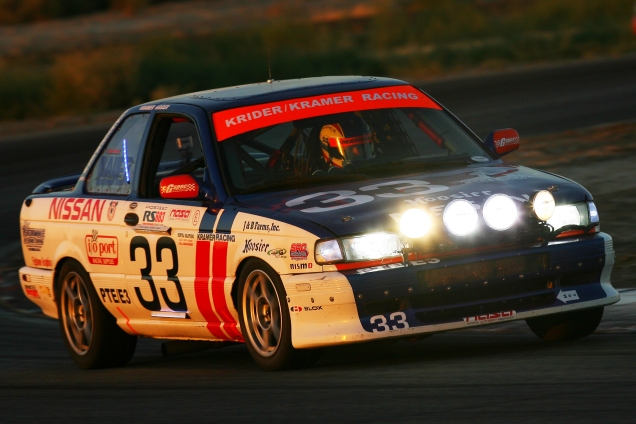 This car earned the team the National Auto Sport Association (NASA) Western Endurance Racing Championship (WERC) E3 Class Championship in 2010. It is a mouth full of a title to state, however it is appropriate, as winning a season long endurance racing championship is A LOT of racing. This car survived the 25 Hours of Thunderhill twice. 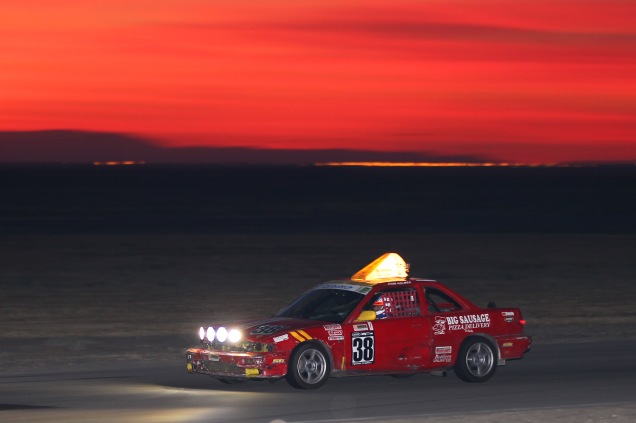 This is the “Big Sausage Pizza Delivery” car that the team won the 14 Hours of Buttonwillow with, as well as 24 Hours of LeMons class wins, and was famously rolled over during the last lap of a race. 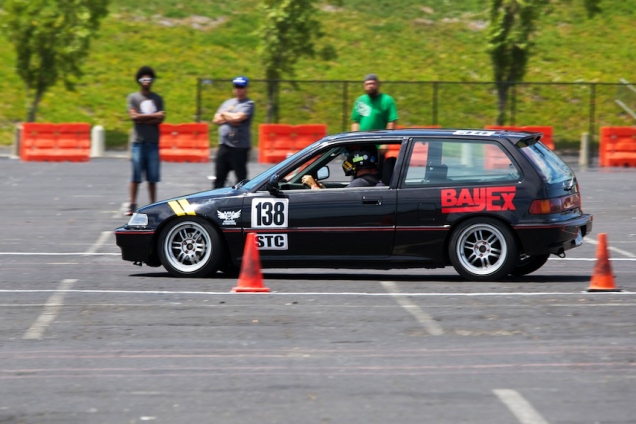 This was the car Rob and Keith were given to modify and race on the BBC television show Mud, Sweat & Gears. Keith actually jumped this car through fire during the finale.

This car, piloted by Addy Krider, struck fear in every boy that had to race against it (and usually lost). This car won the Palo Alto All-American Soap Box Derby Local Championship and went the Word Championships in Ohio as well as the NDR Championships in Kentucky.

This car won the 24 Hours of LeMons race at Altamont Speedway, the track where the LeMons series began. 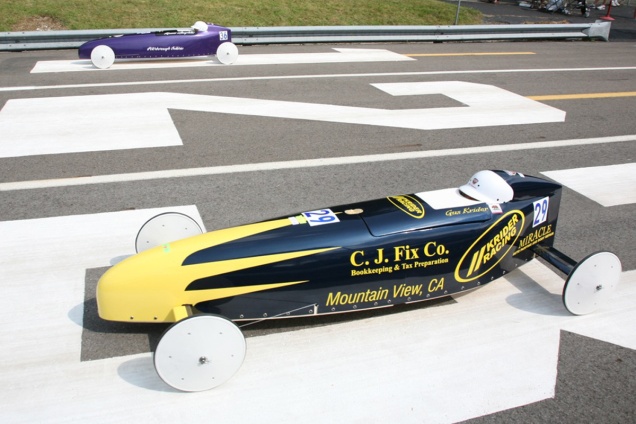 This car went to the World Championships twice with Gus Krider behind the wheel, earning the Masters International Championship one year, and Third in the World in the Rally Division the following year at Derby Downs in Akron, OH.

This car earned the team a heat win at the California State Demolition Derby Championships. Yes, it had Corinthian leather. It was the most insane motorsport event the team has done thus far.

This car was taken out and beat to death at the NASA Rallycross National Championships. The car was never the same after. Thank goodness it was a lease.

When we say anything, we mean the team will race anything. Here is the team’s coffin racer which has earned two championships at the Napa Valley Coffin Races.

This ride was borrowed from its actual owner by the team and raced in the Beeteball -an insane road race for air-cooled Volkswagens. It won it’s class in the Long Beach to Las Vegas race. 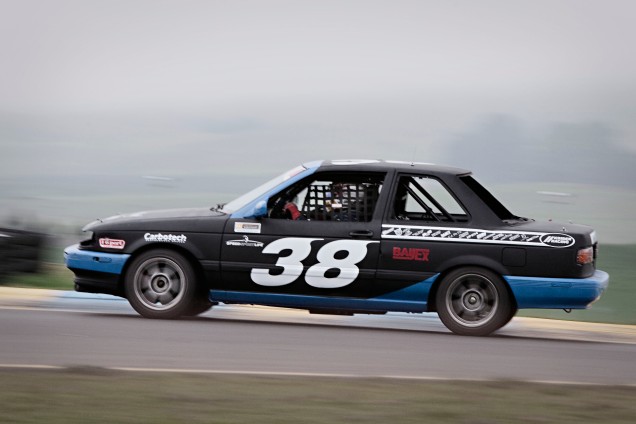 This is the 38 Car that podium finished The 25 Hour in its ChumpCar form where it picked up double podium finishes in one weekend.

This car was used in the extreme sense of the term GT -Grand Touring. It was drag raced, autocrossed, run in the Silver State Classic, prosolo, car shows, run in the SCCA solo Nationals, you name it, all while being used to drive to work everyday. One of our favorites and won numerous National Tour solo titles. 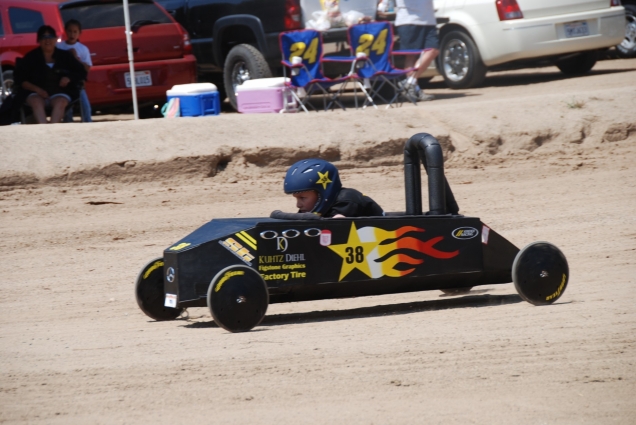 Box Cart Racer “Back in Black”

This home built monster took home a lot of trophies for the kids (and it was also crashed a lot).

If this car looks a lot like the team’s “Pizza Car” that is because it is. Chalkboard paint and a new theme for The 24 Hours of LeMons. 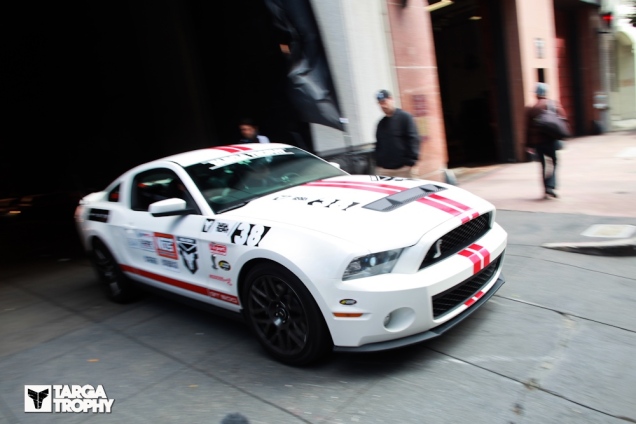 This car was owned by Ford and loaned to the team as part of their press fleet. We ran it in the Targa Trophy event and beat Ferraris and Lamborghinis with it to earn the overall fastest time. An awesome vehicle. We were sad we had to give it back. 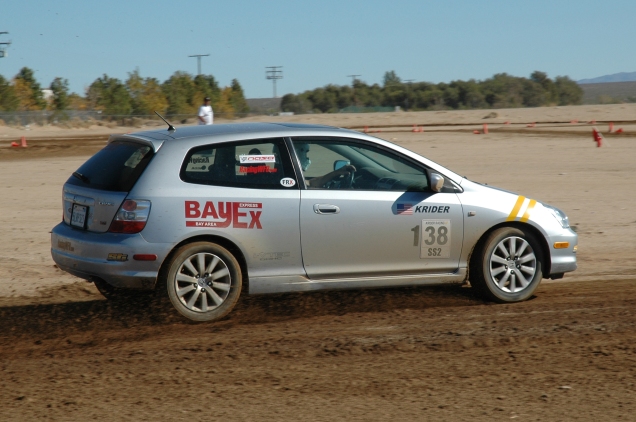 This daily driver and delivery machine for Bay Ex earned second place for the team at the NASA Rallycross National Championships.

This contraption won the 24 Hours of LeMons Cheater’s Pinewood Derby race. After the win, the team drank the beer.

This is the car that won Season 1, Episode 1 of the show The Forum Wars for the team.

Owned by sponsor AJ Gracy of Performance In-Frame Tuning this car was used by the team to race in the U.S. Touring Car Championship. 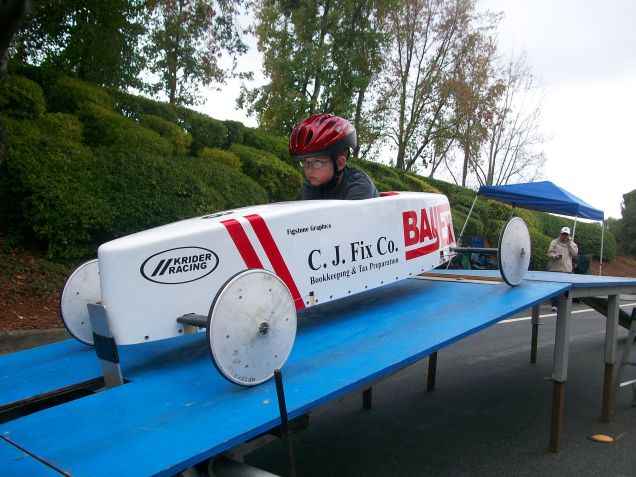 This is probably one of the fastest stock cars ever built and is piloted by James Krider. Currently hangs from the ceiling of Grandpa Jim’s garage. 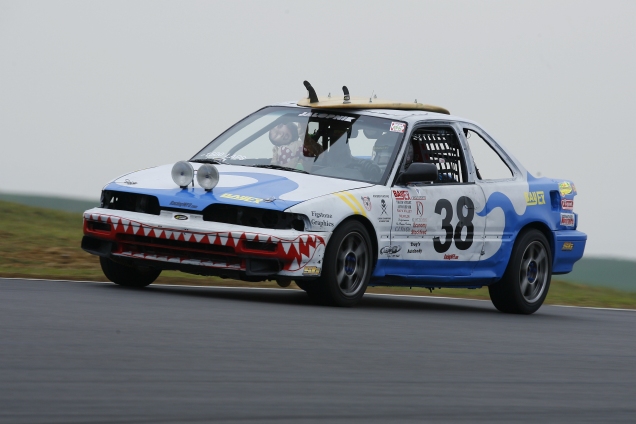 This is the team’s Death Proof car with a new livery and a new problem: a 1,500 lap penalty at the 24 Hours of LeMons (a LeMons record). The team raced hard anyway, regardless of the insurmountable deficit and when the checkered flag waived the team beat everyone by ten laps (if you don’t count the penalty laps, of course).

The team’s kids loved this car because it had the Herbie theme, but it didn’t bring home the number of trophies the team was accustomed to, so it got mothballed, of course. 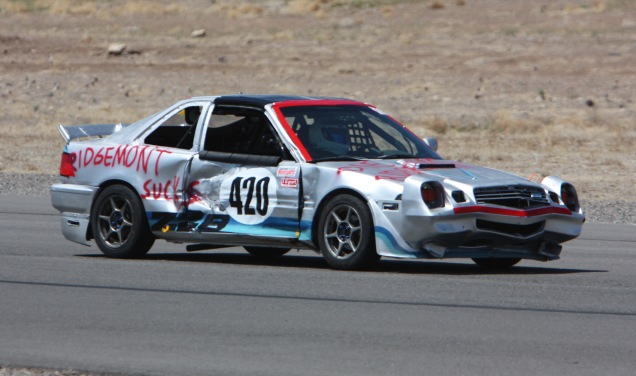 Going crazy with a theme for the car for the 24 Hours of LeMons the team turned an Integra into a Camaro Z28 from the film Fast Times at Ridgemont High. Like the car in the film, it didn’t make it to the finish line.

This little car won the Pack Championship as well as a District Championship, causing Cub Scout derby dads and their kids to spend hundreds of hours in their garages to try and beat it. They didn’t. 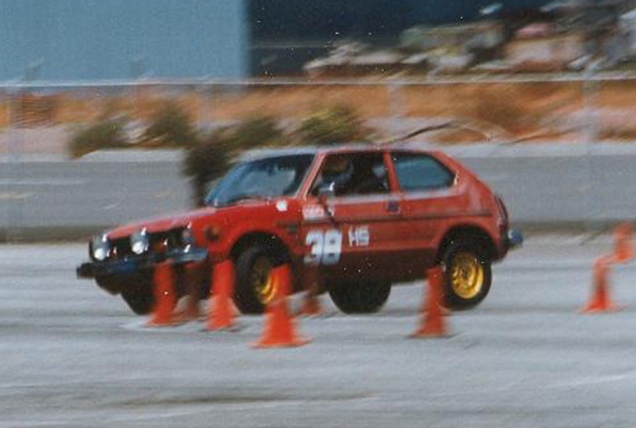 This was the team’s first foray into front wheel drive and it turned out to be a success, winning numerous races with the SCCA. It served as the inspiration for the team to race in the Honda Challenge series many years later. 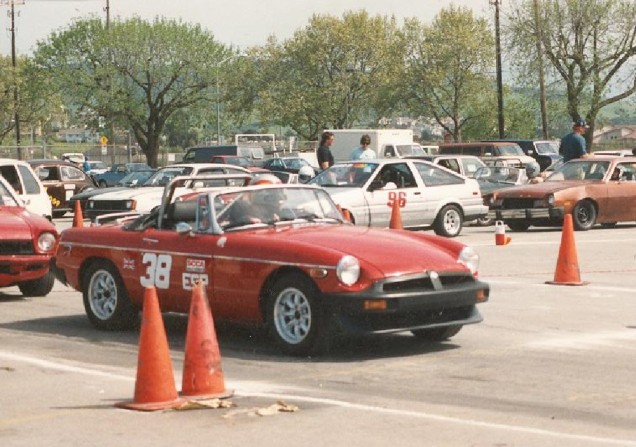 This little red British sports car moved the team up from drag racing to autocrossing. Known by the team as “the slowest car on the planet” it taught Rob Krider how to momentum drive because if you slowed down, it would be along time before you would be going fast again. 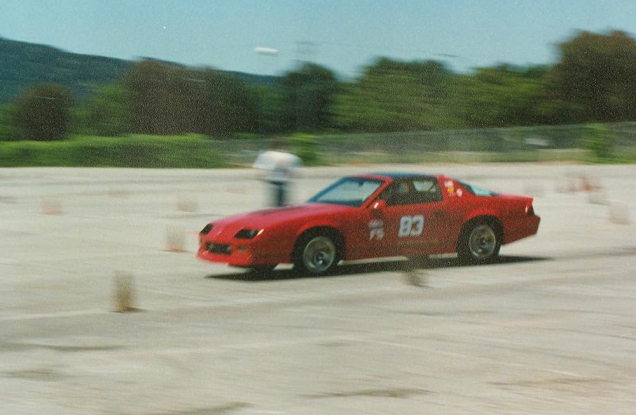 Red with T-tops, this was the coolest car in the 1980s and it was drag raced and autocrossed to death by the team. It was the inspiration to later race the team’s Z06 Corvette. 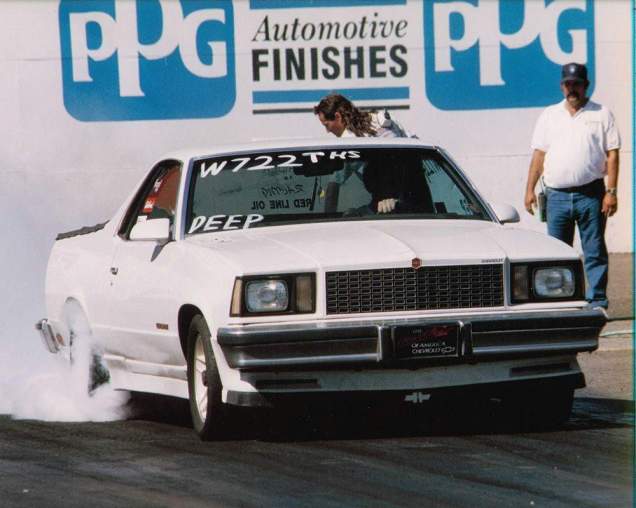 Built from junkyard parts this “business in the front, party in the back” machine won a lot of drag races for the team and finished second in the N.H.R.A. High School Nationals in Phoenix, AZ.

Yes, the team will race absolutely anything. This whip was raced down the crookedest road in the world in San Francisco at the Bring Your Own Big Wheel (BYOBW) event.

SCCA National ChampionshipsSeptember 5, 2022
Kick the tires and light the fires!

This Yokohama tire gave its life for a good cause, another Street-4 class victory this weekend! It was a tight race between two hot hatches, the Fiesta ST against a Golf GTI. In the end it was a Ford party for the win #fiesta #racethefourdoor